Who doesn’t love the smoky, charbroiled taste of food cooked on the grill? Whether you are creating blackened chicken or going low and slow to get that smoky barbeque taste, the grill is a versatile tool to create some tasty meals that are often associated with the summer.

There are plenty of people that don’t let the change in weather affect them, continuing to grill even when the snow continues to fall and the weather turns chilly. But if you aren’t one of those people grilling even when there is a blizzard happening around you, there are other ways to get that same grill experience.

The question is “how can we grill without being outside?” There are methods to learn that can keep you warm and toasty in the safety of your home without having to brave the elements just to get that delicious grill taste.

It will definitely require a few more additional supplies and tools in order to cook your food properly but the process is relatively simple and you can create most of your favorite grilled dishes without having to go out to the grill.

One of the simplest, easiest ways to grill in your oven is by using the broiler pan. This is the method of cooking your food using high levels of heat. This is very similar to using an electric grill, though instead of cooking meat using the flare-ups of flames, the indoor cooker uses indirect heat in order to grill your food.

The process begins by setting your oven to its highest possible temperature. Leave the broiler to preheat in the oven the same way that you might preheat before using something such as a baking stone. The entire process should take no more than 10 minutes or so and you will want to make certain that you use oven mitts to safely move the broiler pan from the oven to the stove.

After placing the food into the broiler pan, take the entire thing and put it back in the oven for around 10 minutes or so. When the cooking reaches the halfway point, use a pair of tongs to flip over the meat. This helps the meat cook evenly throughout. There is nothing worse than having meat that cooks unevenly throughout, leaving different tastes and textures that can make it frustrating in the end.

When the food is done cooking completely, remove it from the oven and let it sit at room temperature for around 10 more minutes or so on the stovetop. This keeps the juices in, allowing the meat to maintain its moisture and flavor. Cutting it sooner could result in it drying out and losing some of its moist flavor that would have been there otherwise.

Another great way to grill indoors and avoid the nasty weather outside is to use a cast iron grill pan. These pans are actually made from the same material that cast iron skillets are. This makes them very durable when it comes to handling the high temperatures of the oven.

The process for grilling your favorite foods in a cast iron pan is pretty much identical to that of cooking in a broiler so it is simple and easy to do for just about anyone of any cooking skill level. Being able to cook a meal that way means putting together a beautiful meal without having to possess world-class skill.

Leave the oven door open slightly in order to regulate temperatures and make certain to use similar time frames when cooking your meals. The biggest difference between cooking in the broiler pan and cooking in a cast iron grill pan is the placement of the pan in the oven itself.

When you are using a broiler, where you place the pan in relation to the heating element can determine how juicy your cut of meat turns out. It can also determine whether that cut of meat comes out well-done or medium rare and that is hugely important when cooking your meat.

When using a grill pan, make certain that it is placed on the lowest oven in the rack at all times. This makes it more ideal for cooking foods such as chicken as opposed to something such as steaks or another good cut of meat.

One more important note is that you need to periodically season a cast iron grill pan. This is the same as if you were using an actual barbeque grill or skillet. Continuously seasoning it ensures that the surface of the pan remains free of rust while adding a bit of flavor to your favorite foods.

3 – Grilling on the Stovetop

If you were thinking that your oven was the only way to grill without having to go outside, you couldn’t be more wrong. You can actually use the stovetop for cooking while making use of a grill pan as well. The grill pan in this instance doesn’t have to be cast iron and there are certainly a ton of options out there for those who want to cook on their stovetops.

It is recommended that if you are going to grill on the stovetop, make sure to marinate your food. If you don’t go with a marinade, try using small amounts of olive oil to keep the food from sticking to the pan. When the food sticks to the pan, it can ruin a meal entirely.

Similar to cooking in the oven, your time frame is around 10 minutes or so. This is usually enough to keep the food from burning while cooking thoroughly. Still, always monitor the internal temperature with a thermometer to ensure that the food cooks to safe levels.

A great reason for cooking on the grill is because there is a smoky flavor as well as a taste of charcoal if you decide to use that over gas. The thing is that most of these tastes can be replicated using a variety of seasonings and oils such as liquid smoke.

Grilling on your stovetop means that you can add any additional flavors and spices to both sides of the meat that you are using. If you want a really deep, rich flavor, try massaging the spices into the food with your fingertips before beginning the cooking process.

You can even implement barbeque rubs or a dry rub into the mix to provide a burst of zesty flavor that is quite reminiscent of those summer flavors that you would experience on the grill with the sun shining down on you.

Being able to replicate the flavors and experience of the grill but on your stovetop means that you can rest comfortably on your couch while your food cooks instead of having to brave the elements instead.

Still, it doesn’t mean that grilling delicious ribs in the house can’t be done using the broiler method as well as a few additional surprises.

The first step is that you should slather the ribs in your favorite kind of sauce. This can be any kind of traditional barbeque sauce that you find on the shelf or you can get creative and try to make your own kind of sauce.

Make sure to wrap the ribs up in aluminum foil in order to lock in the flavor and moisture. Without those two keys, the ribs won’t live up to the hype and you will be vastly disappointed. From here, you will want to place the wrapped-up ribs on a baking sheet and leave them to cook in the oven for around two hours or so with the heat set on 350 degrees Fahrenheit.

When those two hours are done, you will need to remove the foil and place those ribs on a broiling pan. From here, allow the ribs to cook for around another half hour or so. You can add additional sauce along the way to ensure that you get more of that moist, saucy flavor that you love. The key here is to make sure that all sides are coated evenly.

When the ribs are done cooking, allow them to cool down on their own, away from the heat of the oven, for another 10 minutes or so. This allows them to stop cooking, ensuring that you get the proper cook on the ribs while maintaining their flavor and moisture.

And that’s all there is to cooking ribs in the oven. It is so simple that you will wonder why you haven’t tried it before. And even with the weather being cold outside, you can still have smoking-hot barbeque the way that you love it.

While being able to grill indoors is certainly a plus when the weather is frigid, it can also present new challenges when it comes to cleaning your kitchen. With the grill, you can generally just hit it with a wire brush and a little bit of cleaning solution to get it back to looking clean and new.

Inside the house, however, you don’t use the same kind of cleaning solution. You can, however, use a natural oven cleaner that doesn’t have baking soda (or it can have it if you prefer) in order to remove those splatters that are created far more easily than you would otherwise.

If you are looking for a more natural cleaning method, try using lemon juice and vinegar to help remove those splashes of sauce. Those natural methods can also help to clean your outdoor grill as well so keep that in mind.

Cleaning the oven in a comprehensive manner means taking out all of the racks and cleaning them separately. Before placing them back into the oven again, you can then clean the inside of the oven itself. Taking the pieces out allows for easier access and greater accuracy when cleaning all of those components.

Cleaning up after using your oven for indoor grilling is important because there can be a buildup of that grime and grease that can really cake up over time. Taking a few minutes to wipe out the interior of the oven and get rid of all of the stains that are created in the wake of cooking makes it easier to maintain over a long period of time.

When you allow that filth to build up over time, it can be crusty and hard and far more difficult to get rid of. So if you think that it is easier to just clean periodically instead of after every cook, you will likely save yourself time and hassle by just cleaning after each indoor cook.

Just because the weather turns frigid or nasty doesn’t mean that you have to forego cooking on the grill. Using your oven or stovetop can allow you to have access to the same great barbeque foods that you would enjoy during the summertime.

Taking care to follow the proper steps, season the meat properly, and monitor the temperature might seem like a lot to do but that regulating creates the perfect cook that you remember for a long time to come.

Continue to create the perfect meals by using your stovetop or oven to create that grilling effect and get that perfect cook on your meats. Whatever recipes that you would have normally cooked on the grill, you can do in the comfort of your own kitchen.

Enjoying your favorite grilled foods is easier than ever before and you can get a taste of summer even in the coldest months of the year. All it takes is a little ingenuity. 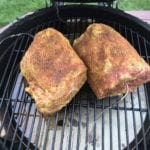 Chuck Roast vs. Shoulder Roast: What You Need to Know 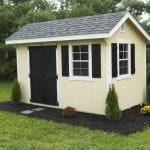 5 Ways to Heat a Shed Without Using Electricity 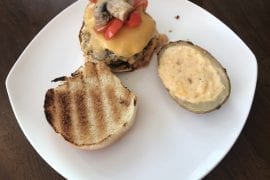 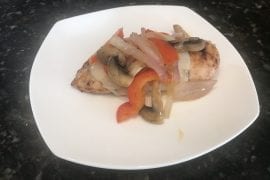